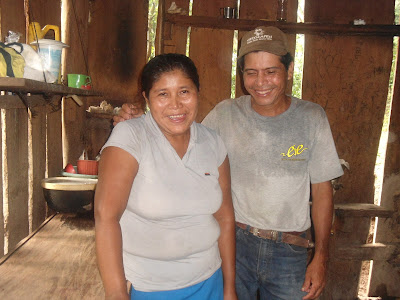 Veronica Benavidez was born in a remote community called Yale. She has 3 sisters and 5 brothers. Veronica grew up farming and she loves taking care of her 5 children. Veronica has not had an easy life at all. She is one of many thousands of women in Nicaragua who have had to really fight to keep her family together. ¨I got married at the age of 15 and my parents wedding gift was a small piece of land. My suffering started three years later when my father became alcoholic and took away the piece of land he had given me¨.

Veronica and her husband first worked for 3 years for a very well-known landowner in the region who had 98 acres of fertile soil. They both managed the business side of the farm and as ¨a token of appreciation¨, they were allowed to ¨live¨ and ¨work¨ on 1 acre of poor quality soil and make a living off it. ¨After the first year, my husband and I felt that we were investing our time, energy and whatever money we could for nothing¨ so we switched into ¨saving mode¨ for 2 more years and came up with just enough to buy one fourth of an acre to live on¨. Unfortunately, Veronica and her husband never received the Deed Title for the plot they bought and a few years later they were kicked off the property. With their hearts full of dreams and hope, they started all over again and started working for big landowners. Again, they had saved enough to buy another piece of land and when they did, guess what happened?! The same ending!

¨It was out of desperation that my husband had thought about illegally migrating to the United States to work, make money, come back and buy a bigger piece of land for us to live. I was totally devastated by his decision and my children were too. That trip would have meant the end of my family but GOD had different plans for us. I am deeply grateful to God for Farmer to Farmer and for the Land for Landless Farmer Program. F2F saved my marriage and my family!¨
By the Grace of God, Veronica and her family now own their own parcel, through the Partners Worldwide Land for Landless Farmer Program. They have a decent house (built by themselves), they grow 13 different crops, they are healthy but the most important is that their faith has been renewed. ¨I will never let God down; I will pay off my loan no matter what¨

Veronica is 37 years old and happily married.  Her husband´s name is Isidro Martinez. They grow banana, plantains, coco, coffee, avocados, pepper, yucca, lemons, oranges, red beans, rice, and sugar cane. They also have chickens, ducks and a cow. Veronica is a member of New Jerusalem Land bank and she is very positive that her family will be the first one paying off the land. She has been part of the program for one year already.

Thank God for Veronica and her family.

Gloria Rodriguez is no stranger to work in pharmaceuticals.  With over 30 years experience working for multinational pharmaceutical companies to develop formulas, Gloria learned every aspect of production.  However, within large companies any formula she developed belonged to someone else, and she was powerless to help underemployed coworkers find extra hours of work.

Using her work experience and a class taught by Partners Worldwide affiliate PCDE, Gloria wrote a business plan to expand the laboratory she had slowly built with small purchases over several years.  Her goals were to meet the needs of aquaculture and poultry farming contacts, provide employment, and develop new product lines based on her knowledge of biochemistry.  With a small loan, she finished the production areas in the laboratory next to her house and purchased the machines she lacked.

While growth is slow and requires many government permissions and patents, Gloria has already begun to expand her business and give weekend work to underemployed workers.  And with the growth of the business, she already has fulfilled one of her hopes--to provide employment that would allow her husband to return.  He had spend many months living in another city during the week in order to keep his job.  Now he is able to be with his family and put his energy into expanding a family business that they hope will create many more jobs in the coming years.
Posted by Unknown at 4:00 PM No comments: 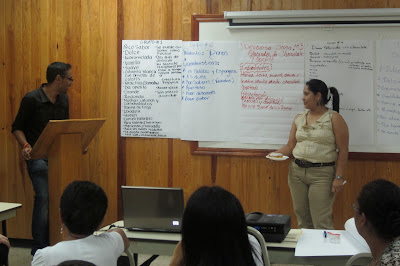 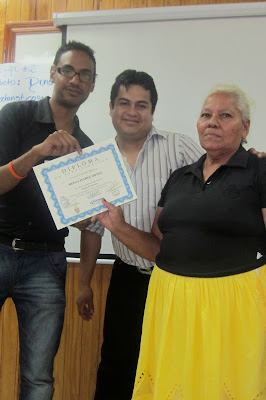 Education: A Key To Success 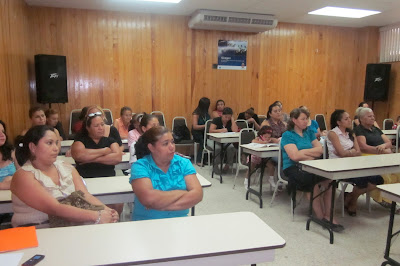 The students of the National Autonomous University of Honduras (UNAH) trained entrepreneurs of Nueva Suyapa on Friday May 25 from 1:00pm to 4:30pm. The students were trained and mentored by Professor Rafael Nuñez director of the Business Administration faculty of UNAH.

Carlos Zelaya, Lino Dominguez and Ana Lucia Castillo senior students of Business Administration and Marketing shared three workshops on: Inventory, Knowing your product, and Motivation and Encouragement in the midst of crisis. 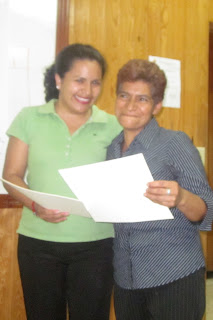 There were thirty attendants from all diferent business industries. There were group discussions and activities where entrepreneurs were able to share their experience and learn from the experience of others attendants. At the end, participants obtained a diploma of attendance and a time of gathering and fellowship.

At the end of the training, the entreprenurs completed a survey giving their opnion regarding the training and the facilitators. Karina, owner of  catering food services commented, “The training was excellent. The advice shared was of a lot of help and we learned new things that we did not knew before”

Other entrepreneurs, also commented on the importance of knowing their products and how the trainings motivate and encouraged them to keep moving forward. “We are grateful for the interest given to us and for the trainings offered...we learn very much from them”

Posted by Joel and Lora at 4:30 AM No comments: