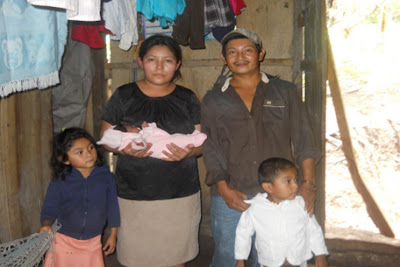 The youngest member of our Mombachito family, Angelita de los Milagros, passed away yesterday morning at 1:00 a.m. at her home in Mombachito, Boaco. It was shocking news after all the efforts that were made in order to help Gloria and Angelita over the past several months. Gloria had an emergency c-section to deliver Angelita in early March. They remained in the hospital for more than 2 months before returning to Mombachito earlier this month. Her situation was delicate in the hospital but since returning home she was doing well, gaining weight and seemed to be out of danger.The photo above was taken when Rolando and Yessenia visited them last week Monday. They said that she looked healthy and strong, so her sudden death was a surprise to everyone.

For families from rural Nicaragua, good health care is difficult to find and often times the farmers struggle to understand the medical terms and explanations given by the doctors. Although Angelita seemed to be in good health, we are unsure of her exact situation caused by her early birth. Rolando believes she may have had a birth defect in her heart that caused her death.


"The most important of life's battles is the one we fight daily
in the silent chambers of the soul." -David O. McKay

As a Farmer to Farmer family we are fighting that battle today as Rolando, Yessenia and Freddy are attending the funeral of that precious baby girl. We ask you for your prayers so that the Holy Spirit will comfort the hearts of Gloria, Lukitas and their relatives. Lukitas and Gloria are new Christians, so pray that the enemy and his lies will be driven far away from them and that these trials and heartaches will draw them into the Lord's arms.